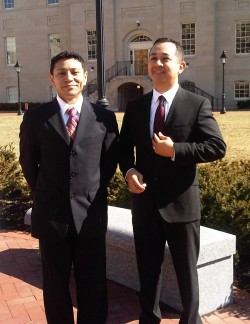 Edwin Echegoyen, an American citizen, and Rodrigo Martinez, a citizen of El Salvador, celebrated eight years together by getting married in Washington D.C. a few days ago. Alas, since they are a same-sex couple, Edwin cannot sponsor Rodrigo for citizenship as Rodrigo faces imminent deportation from the country.

Edwin recounts how meeting Rodrigo in 2003 changed his life for the better. At that time, they were not aware that it would be so difficult to get legal status for Rodrigo, who had overstayed a tourist visa. It was only when the Department of Homeland Security ordered Rodrigo to report to authorities that the gravity of the situation sunk in for both of them. For the Maryland couple, deportation is a death sentence when all they want is a normal life together surrounded by family and friends.

Rodrigo and Edwin are not asking for special rights. They want the same rights already afforded to heterosexual U.S. citizens and permanent residents who currently get to sponsor their foreign citizen spouses for citizenship. Advocates argue that the Defense of Marriage Act (DOMA) is the only legal obstacle that prevents federal recognition of same-sex marriage and prevents same-sex binational couples from seeking immigration benefits available to heterosexual couples.

Despite the threat of deportation, things are looking good for same-sex binational couples. In light of the fact that Obama will no longer defend DOMA in the courts, Immigration Equality, an organization that advocates for the rights of LGBT immigrants, has decided to file a historic legal challenge to U.S. immigration laws that keep same-sex bi-national couples apart. Representatives Jerrod Nadler and Zoe Lofgren spoke out against the deportations of couples under DOMA, marking the first time that members of Congress have requested DHS cease these deportations. More Congressional members are expected to speak out in the near future, putting more pressure on DHS to grant temporary reprieve for all same-sex couples, not just the ones who live in states recognizing same-sex marriage.

In the meantime, advocacy groups such as the Stop the Deportations campaign are pushing for administrative relief from the Department of Homeland Security, since any legal remedies would come too late to save couples like Edwin and Rodrigo.

Write to your officials today to save Rodrigo Martinez from deportation, so that Edwin and Rodrigo can stay together as a family in the United States.