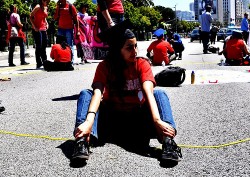 Nine University of California – Los Angeles students, their friends, and family members are celebrating a minor victory after the City of Los Angeles decided to drop all charges against them for shutting down a busy intersection.

Last week, the City of Los Angeles dropped charges against the protesters who had shutdown Wilshire Boulevard in support of the DREAM Act. The protest took place in May 2010 and was closely covered by Change.org.  Nine young students sat down near the federal building on Wilshire Boulevard to show their support for the federal DREAM Act, a legislation that would give many of their undocumented youth friends a pathway to citizenship.

The shutdown was symbolic: not just the traffic, but entire lives are disrupted because Congress has failed to take action on the DREAM Act. The nine young people — all citizens of the United States — were eventually arrested and fined after the peaceful sit-down that lasted more than two hours.

The case was closely watched for its implications on free speech. Prior to this, Los Angeles had never pressed criminal charges against first-time offenders. The type of claims made against the student protesters were usually dismissed as minor infractions. This time around, City Attorney Carmen Trutanich was gunning to make an example out of the students. He came back with additional felony charges against the students. Since taking office in 2009, Trutanich has charged dozens of immigrant rights advocates for exercising their right to free speech.

The hypocrisy of criminally charging these students was evident, given that the Los Angeles City Council and surrounding cities had voted unanimously for a resolution supporting the DREAM Act and Mayor Villaraigosa called on Congress to pass the legislation. Due to this, city officials  were asked to stand in solidarity with the DREAM Act youth and respond to the outrageous charges that the UCLA students are facing at the hands of City Attorney Carmen Trutanich.

Over 500 Change.org members signed the petition asking the city to drop felony charges against the students.  Cynthia Anderson-Barker, an attorney for the student protesters, revealed that the dismissal of criminal charges in this case was a “result of all the political pressure” exerted on Trutanich’s office.

The DREAM Act would grant a path to citizenship for undocumented youth who arrive in the country as minors and pursue higher education. The U.S. Senate failed to pass the bill in the lame-duck session last year with a 55-41 vote.