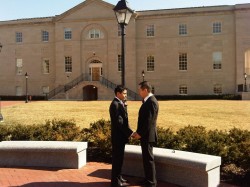 Newlywed Maryland couple Edwin Echegoyen and Rodrigo Martinez can breathe a sigh of relief. Rodrigo has received an official stay of deportation from an immigration judge in Baltimore. The Department of Homeland Security (DHS) also called off the intended deportation to allow Rodrigo to pursue all legal options, asking the couple to check in once a month.

The continued deportations of LGBT individuals married to U.S. citizens and permanent residents makes little sense, given that even President Obama and the Department of Justice (DOJ) are no longer defending Section 3 of DOMA and regard it as constitutionally suspect. With Congress re-introducing a DOMA repeal bill on Wednesday, there is even more reason to stop these deportations.

Over 200 Change.org members signed the petition to Maryland Representative Chris Van Hollen on behalf of Rodrigo, whose planned deportation was only a few days away. A staffer from Rep Van Hollen’s office stated that the “Congressman believes married gay couples or couples united through civil unions should not be discriminated against.  U.S. Immigration and Customs Enforcement should give this case — like every other case — its full and fair consideration.” Rep. Van Hollen joins both Rep. Nadler (NY) and Rep. Lofgren (CA) in condemning the deportations of same-sex binational couples.

In another recent case, Anton, one half of a binational couple, was given more time to renew and plead his asylum case. This latest victory helps to lay the groundwork for asking DHS to exercise discretion and grant temporary relief for foreign national partners of U.S. citizens and legal permanent residents.

The Stop the Deportations Campaign reports that both Rodrigo and Edwin would like to thank everyone who made calls and sent emails on their behalf.