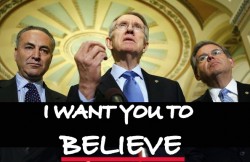 The Democrats are finally going it alone on immigration reform, after Republican Senator Lindsey Graham threw a tantrum and walked out of the negotiation process.

While Change.org blogger Kemi Bello has delivered a sound analysis of the proposal, here is the highlight reel of parts that may appear mind-boggling:

7. The de-gayification of the Uniting American Families Act. Buried on page 22, the proposal seeks to “eliminate discrimination in the immigration laws by permitting permanent partners of United States citizens and lawful permanent residents to obtain lawful permanent resident status.” Is this a progressive step that proposes federal recognition of permanent partnerships regardless of sexuality for the purposes of immigration benefits? Don’t get too excited. The one-liner alludes to same-sex binational couples, but is couched in a non-gay language, almost as if they are trying to de-gayify and hide it from the Catholic Bishops (and maybe everyone else).

6. Trying too hard to appear non-racist. The proposal tries too hard when it states that border enforcement will not encourage racial profiling, a response to the backlash from SB 1070. It actually notes that “northern border cities will be treated just like their southern border counterparts,” but calls for “more agents for the Southwest Border Initiative to investigate the cross-border smuggling of drugs, firearms, and other contraband between the United States and Mexico.” Also, the proposal grants authority to call up the National Guard to the borders. At least someone is fulfilling nativist Tom Tancredo’s wet dream even though it comes as deja vu for many. We know what border they are talking about and it is nowhere near Maine.

5. Border wars create jobs! Besides letting the Department of Homeland Security Secretary deploy National Guards to the border, the senators want to hire thousands more border patrol and ICE agents with “increases in the number of sport utility vehicles, helicopters, power boats, river boats…” alongside some surveillance drones and ground sensors. Obviously, someone dodged the draft and has been watching too many episodes of Border Wars with large doses of a male-bovine injection. Playing one-person shooter video games might help mitigate the effects. We are not at war with Mexico.

4. Throw away those social security cards because microchips are here. Biometric Chuck (coined by Maegan Ortiz) and his friends are back with a national ID card system. Maybe the Iowa congressional candidate who suggested a microchip in immigrants because he can microchip his dog was on to something. Welcome to America, where everyone would be required to carry a microchip with their name, date of birth, social security number, and unique biometric identifier. Maybe it should be tattooed so we don’t lose it. “Number 625272 is legally authorized to work in the USA…”

2. CODE BROWN: Get ready for an “emergency” in the immigration system. This proposal authorizes the creation of the Commission on Employment-Based Immigration, with the power to declare an emergency in the immigration system. Here is an emergency to ponder: with more than 300,000 deportations per year, our communities are terrorized by local law enforcements who cooperate with ICE, our families are being broken apart and children left without parents. But what Reid, Schumer, and Menendez are proposing is closer to a new terror alert system for employment.

1. They want you to BELIEVE in E-verify. Employers hiring workers in the future will be required to use Biometric Enrollment, Locally-stored Information, and Electronic Verification of Employment (BELIEVE) System as a means of verification. George Orwell is rolling in his grave. They want us to believe that this would actually curb the problem of illegal immigration. Given the accuracy and reliability of E-verify, we should be ready to believe that this proposal is not going anywhere but down.

Make no mistake. This new stunt from the Democrats is not a proposal for immigration reform. There is little reform in a bill that keeps the status quo of “enforcement now and enforcement forever” while attaching good pro-migrant bills like the DREAM Act, AgJobs and UAFA to mitigate the horrific parts of the proposal. The Democrats are trying to sell us some really stale pizza by layering it with fantastic toppings. It’s time to take over the bakery.