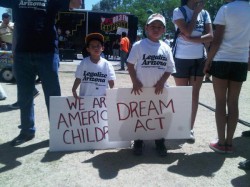 “Whose land? Our land! Whose state? Our state! Whose desert? Our desert! Whose family? Our family!”

A few days after celebrating a bi-partisan effort from Senators Richard Durbin (D-IL) and Richard Lugar (R-IN) to stop the deportation of DREAM Act-eligible youth, immigrant youth in more than 10 states took to the streets to protest the draconian Arizona legislation, which legalized racial profiling and stripped all Arizonians of basic civil liberties.

The fallout from SB 1070 has given advocates a rallying cry for the immediate passage of the DREAM Act, in addition to pushing for a larger comprehensive immigration measure.

SB 1070 — the most anti-immigrant legislation in the country — seems legally doomed, but whatever the outcome, one thing is clear: Immigrant youth are leading the way. From the nine students who chained themselves to the Capitol building doors to the thousands walking out of Phoenix schools to the hundreds more organizing solidarity local actions in their states, immigrant youth are at the front and center, and moreover, the heart of the debate.

The 2500-strong Sunday rally in Phoenix, Arizona drew the likes of Representative Luis Gutierrez and Representative Raul Grijalva, with immigrant youth reportedly outnumbering their allies by a margin of 7-1. Perhaps no one puts it better than Gihan Perera, the Executive Director of the Miami Workers Center, that it is the young people who are exerting their right to be human and that “this is more than a political protest. It is a cry for life and a cry for a secure and free future for all people.”

On the East Coast, Yale students in Connecticut held a mock ICE raid on Thursday in opposition to SB 1070 while on the West Coast, UCLA students organized a rally, adamant that they did not want Arizona to be the standard. Members of the DREAM Team Los Angeles joined the rally and also put together actions at Senator Feinstein’s offices in both Los Angeles and San Francisco, drawing hundreds of people.

The heartland was not to be left behind. Ann-Arbor, Michigan responded with a blistering cry chanting “go by the books, don’t judge us by our looks!” and “Brewer Brewer your politics are going down the sewer!” while Kansas-Missouri DREAM Act Alliance (KSMODA) drew a hundred people out on short notice for a vigil, the highlight being a dog wearing an outfit that said “Does this outfit make me look illegal?” Illinois joined on Monday with the Immigrant Youth Justice League (IYJL) leading an overnight rally at the Broadview Detention Center in Chicago. Twenty-four people were arrested, including members of the clergy and students. More actions will continue throughout the week, leading up to the May Day marches for immigration reform.

United We DREAM has issued a statement highlighting their May 1 action in Washington DC when the Trail of DREAMs and Trail of NY will come together for a May Day rally and march. With all eyes on them, immigrant youth from California to Texas to Philadelphia are expected to attend and pave the way for the next step in the struggle to reform immigration for America.