Home »Immigration»Boycott Arizona: Ask Major League Baseball to Step Up to the Plate 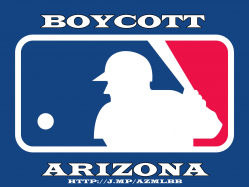 Do you know what an “illegal immigrant” looks like? Neither does Governor Jan Brewer, but she signed the draconian SB 1070 anyway, which would mandate that law enforcement officials apprehend undocumented immigrants just based on “reasonable suspicion.”

A reasonable suspicion standard could mean that some of our Major League Baseball players like Juan Gutierrez, Gerardo Parra, and Rodrigo Lopez from the Diamondbacks would probably get scrutinized based on their skin color if we allow the harsh anti-immigrant Arizona law to stand.

Indeed, a call for Major League Baseball to boycott Arizona as the venue for the 2011 All-Star game is already underway. You can sign the petition directed to MLB Executives here.

In 1947, Major League Baseball paved the way for desegregation way before the rest of the country by allowing Jackie Robinson to take the field for the Brooklyn Dodgers. Today, at least 27.4 % of players in MLB were born outside the United States while almost one-third of the MLB roster comprises Latinos and people of Latin descent.

This is a great opportunity to hit Arizona in the pocketbook. Advocates point to how the the NFL moved the Superbowl from Arizona some 20 years ago because voters in the state rejected MLK Jr. Day as a national holiday. It is estimated that from 1990 to 1993, Arizona lost 170 conventions and $300 million in boycotts alone. One would think that the Grand Canyon state would have learned its lesson from failures in the past — apparently not.

SB 1070 breeds a climate of fear and hatred against Latinos and non-white immigrants. It is counter-productive, unconstitutional and legislates a system reminiscent of apartheid, which is not considered very American. But baseball is celebrated as the most American sport. Organizers of this boycott believe that we must not tolerate situations where our players are cheered on the field and asked for their papers off-the-field.

So sign the petition here and share this on Twitter: Tell @MLB to step up to the plate: Reject #SB1070 and move 2011 All-Star Game from #Arizona http://j.mp/BoycottAZ #AZMLBB #LegalizeAZ #p2