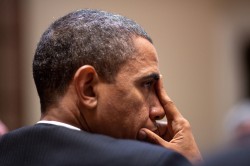 After meeting with immigration advocates at the White House, President Barack Obama is widely expected to deliver a speech addressing the need for comprehensive immigration reform on July 1 at American University’s School of International Service.

While it may not come close to the 38 words delivered by our gifted orator at the State of the Union address earlier this year, President Obama is expected to remind Republicans that the immigration system cannot be fixed by just border security, and that Congress must begin bipartisan talks for comprehensive immigration reform.

“We are a nation of laws. But we are also a nation of immigrants. There’s some talk in Washington, D.C., that we cannot even discuss immigration reform until we ‘secure’ the borders. This is not true. As President of the United States, I’ve escalated workplace raids and deportations, presided over record seizures, and put more manpower, technology and infrastructure at our borders. It’s time the Republicans stop making excuses and come together to work on comprehensive immigration reform.”

That seems pretty close to Obama is widely expected to say on Thursday. He’ll parade as the D.C.-outsider while putting the blame squarely on Republicans, even though the Democrat Party leadership is holding back on implementing incremental immigration reforms. And we are all nauseous from the overdose of déjà vu.

I’ll give the President some credit. He has had a pretty rough year with fund-raising trips for Democrat candidates like Barbara Boxer, taking the golf clubs from Tiger Woods, and settling World Cup debts over beer at the G-20 summit. At least Obama is still unwavering in his commitment to immigration reform judging by his many reiterations of support: before winning the Democrat primaries in December 2007, after winning the primaries in July 2008, with his election as President of the United States (March 2009), announcing in May and June of 2009 that he wanted to pursue immigration reform that year, and re-announcing in May of 2010 that Congress had begun work.

Maybe the President is on a different calendar system. His commitment seems like the unwavering commitment of a husband who is going through the motions of a marriage without consummating it. Sooner or later, the spouse is bound to find another partner or just cut their ties.

The forthcoming empty words on July 1 are supposed to placate the 70% of Hispanics who voted President Obama into office only to see no end to Bush-era enforcement-only immigration policies. But the Democrats are fooling no one.

I’ll make some noise with the vuvuzela if I am wrong about his speech on Thursday, but in the meantime, don’t hold your breath.