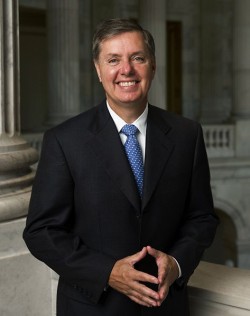 You can be a “champion” for immigration reform and still loathe “anchor babies.”

Once the Senate Republican champion for a “comprehensive immigration reform” bill, Lindsey Graham (R-SC) has come out in support of overturning the 14th amendment provisions that provide birthright citizenship for children born in the United States.

“I may introduce a constitutional amendment that changes the rules if you have a child here,” Graham said during an interview with Fox News, which probably sent Fox News viewers into a wild frenzy.

The statement to Fox News came as a response to a federal judge prohibiting key components of Arizona’s anti-immigrant law. As a result of the ruling, right-wingers are coming out of the closet with threats of violence and more novel (read: stupid) ideas on how to limit immigration from those “illegal Mexicans.”

After all, it is quite unlikely that Senator Graham and his ilk (other white Republicans) would even consider banning birthright citizenship of children born to undocumented immigrants if those immigrants were overwhelmingly white. The fact that repealing birthright citizenship comes as a response to losing the racial profiling aspects of SB 1070, provides convincing evidence that the anti-immigrant fervor has little to do with enforcing the law of the land and more to do with attrition towards Latino immigrants and people of color.

“They come here to drop a child. It’s called ‘drop and leave.’ To have a child in America, they cross the border, they go to the emergency room, have a child, and that child’s automatically an American citizen. That shouldn’t be the case. That attracts people here for all the wrong reasons,” Graham said.

Point of order Mr. Graham. People don’t come here to “drop babies and leave.” They mostly come here to work because their own countries are ravaged by either political violence, corruption or economic woes. When they want to go back to their homes, they face stringent border control and enforcement that makes it slightly more lucrative for them to stay here and give their American-born children a better life.

After all, the proposal would create a new class of American-born babies who are unauthorized to stay in this country and disenfranchised from the system. Not only that, but many would be rendered “stateless” since no other country would take them. That is nowhere near a solution for a broken immigration system that is out of touch with labor needs and separates families due to unbelievably long waiting times.

Maybe the Senator from South Carolina is simply frustrated about the political gridlock in the Senate that has held up a lot of legislation. He is particularly steaming about the fact that a vital resolution he introduced last month to praise the University of South Carolina baseball team for winning the 2010 College World Series is still stuck in the Senate Judiciary Committee, along with legislation like AgJOBs and the DREAM Act.

Graham and his ilk knows that there is no chance that a constitutional amendment to ban birthright citizenship would ever garner enough votes to pass. He is simply throwing red meat to rabid right-wingers. And they are gobbling it up for the time being.