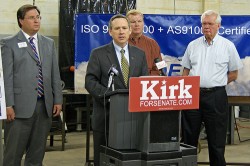 With one day to go, the race for the coveted Illinois Senate seat is nearly tied with Republican Mark Kirk holding a slight lead.

Giannoulias makes no qualms about his support for the DREAM Act. In fact, during the Senate debate between the two candidates, Giannoulias pressed Kirk on whether he supported the DREAM Act. At first, Kirk could not bring himself to say “No,” but he finally relented and stated that “It’s not time for the Dream Act right now. If the Dream Act came up for a vote right now, I would vote ‘No.'”

In response, students from the Immigrant Youth Justice League decided to meet with Rep. Mark Kirk in the hope that if he heard their stories, he would support the cause. In fact, student advocates in Illinois have been trying to get a meeting for the past two years, making 40 formal requests and 60,000 calls just to get a meeting. Last Friday, three undocumented students sat in his office and risked deportation simply to get a meeting with the Congressperson. They left when a volunteer staffer called the police on them. Later, an undocumented student got kicked out of a Kirk rally for trying to give him a letter of support. Apparently, Mark Kirk neither wants to meet nor hear from his constituents even before winning his Senate seat. This does not just reflect opposition — it is a sign of hatred and animosity towards young Americans willing to become productive citizens and it makes no sense.

Since Harry Reid has promised to bring up the DREAM Act in the lameduck session, the winner of this particular seat to replace Senator Rolland Burris may just determine the fate of the DREAM Act this year.

Undocumented students cannot vote. But they are pretty sure that their actions can determine the fate of this Senate race and their future. The fact that the DREAM Act is an election issue may just be one of the most significant victories for immigrant rights this year.