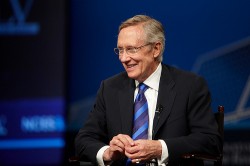 The Senate Majority Leader, Harry Reid, is hanging on by a thread and grasping at straws as he battles with Sharron Angle to keep his political career alive. Cue the underground race between N.Y. Senator Chuck Schumer and I.L. Senator Richard Durbin angling for the role of Majority Leader. As a last ditch effort to get out the Latino vote, Senator Reid has promised a vote on the DREAM Act this year, whether he wins or loses the election.

The DREAM Act is bipartisan legislation that would allow undocumented immigrants who were brought to the U.S. as children and have graduated from American high schools the opportunity to earn legal status by completing two years of college or military service.  It has the support of 70 percent of all Americans and nearly 78% of Latino voters. If the 14% of Latino electorate in Nevada turned out to vote today, Harry Reid would have the elections in the bag.

It’s a political ploy; nonetheless, kudos to Senator Reid for not backing down in the face of Sharron Angle’s race-baiting anti-immigrant ads. He could have opted to stay silent and distance himself from a pro-migrant agenda, but he is standing his ground. The battle in Nevada is now a fight over immigrant rights, over favoring a less-punitive legalization approach versus gunning for mass deportations and attrition of peoples from their homes and communities.

Whether Nevadans vote for or against immigrants, it is clear that the future of the DREAM Act is also on the line. If Reid wins, he gets a clear mandate to bring up the DREAM Act. A loss would be another setback for a budding movement.