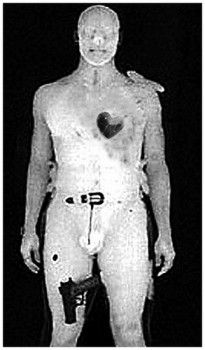 TSA is in the process of implementing new pat-down procedures at checkpoints nationwide, better known as “show us your body or we’ll feel you up.” Essentially, the new policy is to do a thorough touch-and-feel intrusive search of anyone who does not want a full body-scan.

Just last week, TSA agents at Baltimore airport warned an airline passenger that they would start doing “crotchal searches” at airports. “We have to search up your thighs and between your legs until we meet resistance,” the agent explained, identifying resistance as testicles. Testicular-fondling is now part of our national security apparatus and TSA agents can sexually assault people who need to get on commercial airplanes.

Everyday Americans are already feeling the effects of this new policy. After her underwire bra set off an alarm, CNN’s Rosemary Fitzpatrick admitted that she was reduced to tears when subjected to the new pat down. “I felt helpless, I felt violated, and I felt humiliated,” she said.

Here’s the clincher. TSA blogger Bob tells us that all airline travelers can ask for a grope, I mean, pat-down, in a private room because that is somehow supposed to make the gross invasion of privacy so much better.

The new policy does not bode well for anyone. I wonder what would happen first — guys requesting woman TSA agents to “pat them down” or homophobic attacks on LGBT TSA agents. It also does not make sense for policy reasons. Most terrorist plots are planned way in advance of intrusive airline checks and there is little-to-no evidence that increased airport security has foiled a planned attack.

The Electronic Privacy Information Center is suing DHS to stop the use of full body scanners, arguing that TSA “must comply with relevant law, and it must not be permitted to engage in such a fundamental change in agency practice without providing the public the opportunity to express its views.” Tell TSA that neither “crotchal searches” nor full-body scanners are acceptable for protecting our security.